Visual Statistics Display (vsd) is a graphical tool that allows you to view statistics generated by the GemStone/S 64 Bit or GemStone/S server, or by GBS.

VSD allows you to monitor performance, in a live system or offline, and can help diagnose many kinds of problems that may occur in complex systems. 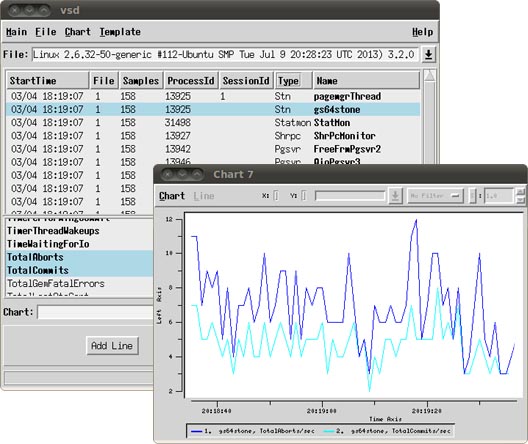 VSD is distributed with GemStone/S and GemStone/S 64 Bit on UNIX, Linux, and Mac platforms, and with Windows in v.3.2 and later. GemStone server Windows client distributions on earlier versions do not include VSD.

VSD can be used under the license terms covering any GemStone/S 64 Bit, GemStone/S, or GBS product.

For a list of VSD versions 3.5 and later, and the release notes describing changes in each version, see the Release History and Table of Release Notes.

VSD v5.5.4 is a minor maintenance release of the VSD product, containing a fix for a rare but significant bug.

For documentation, download, and other information on older versions, refer to VSD versions.

Download the version of VSD 5.5.4 for your Operating System:

These are 64-bit executables. 32-bit VSD is no longer distributed. 32-bit v5.4 is available for download and is compatible with statmonitor data generated with versions of GemStone though 3.5.x.

Bugnotes describe bugs and unexpected behavior in versions of GemStone software. Refer to these bugnotes regularly to be sure you are aware of issues you may encounter.

For bugnotes for other versions and other products, see the complete list on the Bugnotes Resource Page.