GemBuilder® for Smalltalk / VW provides an interface between Smalltalk clients in Cincom’s VisualWorks Smalltalk and GemStone, and works with the Smalltalk execution engine to support application partitioning for improved client/server performance. 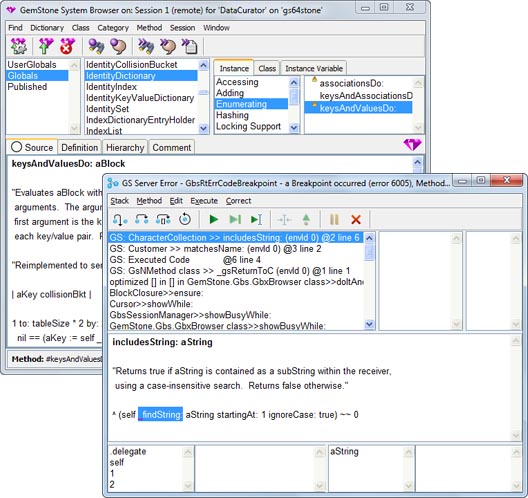 You must agree to license terms and have an appropriate GemStone/S server license and keyfile, in order to use GemBuilder for Smalltalk / VW.

For a list of past versions of GemBuilder for Smalltalk/VW, and the release notes describing changes in each version, see the Release History and Table of Release Notes.

To lookup the GemStone Server product and versions, client Smalltalk versions, and OS platforms supported by GemBuilder for Smalltalk/Vw, see the following:

For documentation, download, and other information on older versions, see All GBS/VW versions.

You may only download if you have have appropriate license agreements, or will be using GBS/VW with a Community Edition License.

Bugnotes describe bugs and unexpected behavior in versions of GemStone software. Refer to these bugnotes regularly to be sure you are aware of issues you may encounter.

For bugnotes for other versions and other products, see the complete list on the Bugnotes Resource Page.